Author Ellen Baker of the newly released paperback Keeping The House ever so graciously accepted my Q&A request and kindly took time out of her busy schedule to answer a dozen questions about her book and writing.  Ellen is currently promoting her novel, Keeping The House with the help of a book tour.  Her event schedule and more information about her and her book can be found on her website HERE.  Keeping The House was listed as one of the Chicago Tribune’s “Favorite Books of 2007”, was a featured selection of the Doubleday Book Club, and was selected as an “Insider Discovery” title of the Literary Guild.

To learn more about Keeping The House and enter in the signed copy book giveaway please check out my review HERE.  To refresh your memory, here is a summary of the book followed by my interview with the lovely Ellen Baker.

Summary ~ “When Dolly Magnuson moves to Pine Rapids, Wisconsin, in 1950, she discovers that making marriage work is harder than it looks in the pages of the Ladies’ Home Journal.  Dolly tries to adapt to her new life by keeping the house, supporting her husband’s career, and joining the Ladies Aid quilting circle.  Soon her loneliness and restless imagination are seized by a vacant house, owned by the once-prominent Mickelson family.  As Dolly’s life and marriage become increasingly difficult, she begins to lose herself in piecing together the story of the Mickelson men and women – and unravels dark secrets woven through the generations of a family.  As Keeping the House moves back and forth in time, it eloquently explores themes of heroism and passion, of men’s struggles with fatherhood and war, and of women’s conflicts with issues of conformity, identity, forbidden dreams, and love.” 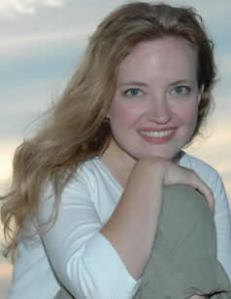 PB:  What originally inspired you to write the family saga that became Keeping The House?

Ellen:  I was originally inspired to write about the Mickelson family when I spent a summer in beautiful Door County, Wisconsin, during college, about ten years ago.  I was working at the local historical society at the time and learning a lot about the history of the area, and I found it so interesting that “summer people” came back to this idealized place year after year for a break from their everyday lives and concerns, especially since this was a lifestyle I’d never experienced.  I wondered what would happen to a family hoping to go back to their old summer way of life after suffering a terrible tragedy, something they wouldn’t be able to “get over” just by escaping to this gorgeous place.  The story expanded from there, and that original setting – the summer of 1919 following Jack Mickelson’s return from World War I – ultimately became just one chapter of Keeping The House.

PB:  Who was your first character and which one came the easiest to you to write a point of view from?

Ellen:  The Mickelson family came first, all at once – John, Wilma, Jack, Chase, Harry, and Jinny.  Dolly Magnuson came toward the end of the process, but she was the easiest to write about.

PB:  I have read that you admitted that Harry Mickelson is your favorite character.  Who is your least favorite?  Are you a character in your book?

Ellen:  I really don’t have a “least favorite” character; I imagine I feel about my characters the way I would if I had children – I love them no matter how badly they behave!  I don’t believe that I’m any character in my book, though of course they all contain elements of me.  I’m like Dolly in many ways, although I didn’t think so when I was first writing about her.  I’m more of a “sit back and think” person while she’s “act first and think later,” but we’re both dreamers and romantics and we both wish and strive for the impossible.  I think that Anne is probably who I wish I was… and Wilma is who I might have been had I lived a century ago.

PB:  You have a powerful attraction to the World War eras and have devoted so much of yourself to study and preserve this time in American history.  What about this period attracted you in the first place?

Ellen:  I’m not sure exactly where it began, but the more I learned about the first half of the twentieth century in America, the more I found it all so fascinating.  I love the fashion, the music, the way people use language.  I love the fact that technology is developing so rapidly and changing the way people live.  And I think that during the wars, life was lived at a very intense pitch.  There’s a lot of love and romance and a lot of violence and grief; I guess the contrast and the collision of all these forces are what fascinate me. 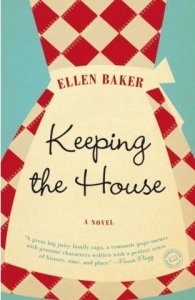 PB:  When you write, do you use paper and pen or a computer?  Do you have a time and place that you have to write within?

Ellen:  I use a laptop computer, and I like to be comfortable – so I’m usually sprawled out on the couch, with a cup of tea not far away.  I find that first thing in the morning is my best time to write, but I’ll write and revise all day long if I can.

PB:  What is your favorite part of the novel writing process?

Ellen:  I don’t think I could pick just one part of it – I enjoy the whole process.  I love research and character development, I love writing a first draft and being surprised by what happens, and I love editing and seeing all the elements of the story coming together into a coherent whole.

PB:  Did the story go the way you always thought it would or did twists and turns surprise you as you wrote them?

Ellen:  There were many, many surprises along the way!  When I started writing, I really didn’t know what the story was going to be, exactly, beyond the idea of following the Mickelson family through the two world wars.  I didn’t at all write the chapters of Keeping The House in the sequence they appear in the book now.  Some of the earliest scenes I wrote were about Elissa and Nick meeting at the dance, and about Wilma making pickles, as well as the World War I scenes from John’s point of view (including the one that now is on page 398!).   I’d actually been working on the book for almost two years before Dolly came on the scene.  That she became the centerpiece of the book – what I ended up structuring the rest of the novel around – was the biggest surprise of all.

PB:  You wrote Wilma Mickelson as a piano virtuoso.  Do you have a musical background?  If so, is the piano your instrument and what is your favorite piece of music to play?

Ellen:  I made Wilma a pianist because she needed to have an abiding passion, something she was conflicted about giving up.  I’m not a pianist – I just took a couple of years of lessons when I was about seven and eight years old – but I was pretty serious about the flute when I was in high school and into college, so I can identify with the process of practicing a piece to try to achieve perfection.  I’ve always liked playing the piano for fun, though, and I’ve enjoyed attempting to play Beethoven’s Sonata Pathetique, which Wilma plays (much more successfully!) in the novel.

PB:  Have you ever made any of the recipes you researched for Dolly to prepare for her husband Byron?  Any favorites?  In your first years of marital bliss did you keep a cooking journal like Dolly?

Ellen:  You’re funny!  I haven’t made any of Dolly’s recipes, actually, but a bakery is preparing her Lacy Raisin Wafers for book clubs (people can visit my website to sign up to win some) so I’ve sampled those and they’re very good.  I had fun researching the recipes and planning the menus for Dolly and Byron… and when I was newly married I guess I did try to plan out each week’s menus and pay attention to what my husband liked and didn’t like, but I certainly wasn’t as efficient as Dolly!  I imagine if I’d been married in 1950 I would probably have been just like her, though, in the context of those times.  Fortunately for me, getting married in 2001, I was able to put most of my obsessive creative energy into writing fiction.

PB:  Throughout Keeping The House you have quotes from different publications from the first half of the twentieth century.  Which one did you find most outrageous?

Ellen:  The quotes from the Look magazine article “The Other Woman Is Often the Creation of the Wife” and the idea that if a husband is having an affair it is up to his wife to “make adjustments” and “be more cheerful and attractive than usual” seem pretty outrageous.

PB:  On your MySpace page you have posted a picture of a banister and two portraits.  Was there really a Mickelson family and house or are these pictures of your own banister and relatives?

Ellen:  The Mickelsons are totally fictional, and somewhere, someone is going to be surprised that I stole photos of their relatives out of a yearbook-type section of photos in a history about a small town in Wisconsin!  It wasn’t my intention – I got the book to help me lay out the town of Pine Rapids – but when I saw those photos, it was clear to me that that woman was Wilma and that man was Harry.  I always rifle through old photos at antique shops, too, to see if I can find unlabeled photos that seem to be a character.  The banister photo was taken in a bed and breakfast that I visited.  I stole architectural details from many B&B’s in Wisconsin to design the Mickelson house.

PB:  What is the most interesting question you have received while on your book tour to promote Keeping The House?

Ellen:  I’ve received lots of really interesting questions, but one that sticks out in my mind is “What is the significance of the color red for Dolly?”  I hadn’t really thought about it in those terms – somehow I always just knew she’d be drawn to the color.  I remember when I wrote Dolly’s first quilting group scene, there was no question in my mind what she would be wearing – the flaring white dress with red trim and the bright red lipstick (which makes her feel conspicuous among the subdued ladies of the group).  But as a result of getting this question, I realized that red does symbolize Dolly’s passion and daring, and shows how different she is from the other people in Pine Rapids.