Only one more Sunday in the year left after today.  It’s hard to believe that 2008 is almost a mere memory and a new number will round out the year.  With the new year just around the corner, so is my 34th birthday.  I am a New Year’s Baby, minus the big ears.  I am not freaking out about the number 34 as I was a couple of months ago when I came across the first gray hair I’ve ever noticed on my head.  I immediately went to the store and purchased hair dye to cover that little bastard up.  I will have to get another box soon since his friends decided to join him as my roots are beginning to show.

The new year will also find me attempting a much needed, devoted attempt at dieting.  I’ve asked Santa/Hubby for a new pair of Nike Shocks so I can start walking in addition to dieting.  I do have a goal which is good and is actually a huge motivation for me.  In June I plan on attending Fan Fair, now called CMT Fest, in Nashville, TN with my friend Jesse (the one who got married in D.C. last month) and I would like to be comfortable wearing short sleeve shirts and not being self conscious about my arms the whole time.  We’ll see what I can do.

But I am not dieting yet and that has been apparent over the last few days.  With the holidays upon us, I have been a baking fool and Hubby has been making some delectable dishes.  Today I made both Martha Stewart’s Pumpkin Bread and Banana Nut Bread (with coconut) and yesterday Hubby made Tyler Florence’s Mac & Cheese.  That Mac & Cheese came out of the oven looking so pretty, bubbly and perfect I had to take a pic and share it with you below. 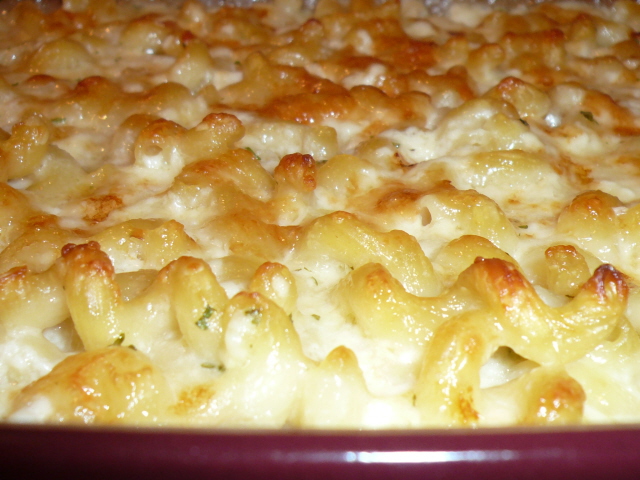 I have been reading too this weekend.  I am almost done with The Guernsey Literary and Potato Peel Pie Society.  I could have been finished by now but I am enjoying the story and it’s characters so much that I have been taking my time.  It’s also the 33rd of 33 books I will have read this year.  I had made a goal for myself back in January to read 33 books for the number of birthday’s I have celebrated.  I will be doing a top five or top 10 list (I haven’t decided yet) of the books I have read this year by the end of it.

What reading goals did you make for yourself this year?  If you didn’t will you be making one in 2009?  Also, did you eat anything mouthwatering this weekend too?  Do tell!