I have to tell you all about my AWESOME Saturday night!  It was date night with hubby and it was especially wonderful because Hubby agreed to join me at a book reading/signing event after dinner.  One of my favorite authors, Garth Stein had an event at the Bethesda Writer’s Center in Bethesda, MD tonight.  He was there to discuss and read from his New York Times best seller The Art of Racing in the Rain and he was fabulous.  This was the first bookish event that Hubby has attended with me since I became “bookish” myself.  It was fun and we started our evening with a nice dinner at Tower Oakes Lodge and then made our way to Bethesda.  We walked around Bethesda Row, checked out Barnes & Noble, the Apple Store (all the iPads were busy with other customers/gawkers so we played with the iPhones) and even had a local celebrity sighting.  Every evening I watch the ABC local evening news with Gordon Peterson.  I grew up watching him when he was a news anchor on CBS but since moving out of the area and then coming back seven years later Gordon and his team moved to ABC, so I followed. 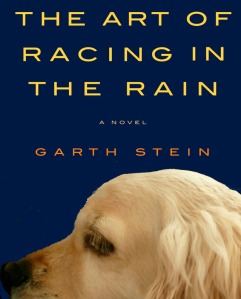 Anyway, I digress.  After our nice walk we headed over to The Bethesda Writer’s Center and took our seats with LibraryLove and one of her girlfriends.  I was very excited to be attending this event with Garth Stein because The Art of Racing in the Rain is one of my all time favorite books.  I had the great privilege of corresponding with Garth Stein a couple of years ago when his touching, enjoyable, heart wrenching and funny book told from the point of view of a dog named Enzo first came out.  You can check out my review HERE.  Garth wrote a great guest post for me HERE on Planet Books back in 2008.  Hubby, Rocky and I were living in Okinawa, Japan at the time and to have this opportunity to meet him in my hometown area, now that we are living back in the area was fantastic and very special.  Garth is from my parents hometown area of Seattle and his books take place there, which makes it nice for me to read them because I recognize landmarks and locations that make it into his stories.

I have to say that the whole event; the reading, the story telling, the history lesson, the Q&A and the signing, was perfect!  Garth Stein is a great public speaker and to hear him read from his book was great.  The audience was responsive to his jokes and sentimental references.  The event lasted ninety minutes and most of that time was spent listening to Garth talk, read aloud and answer questions from his fans.  I was thrilled that he answered one of my questions!  I asked Garth if he hugged his real life dog Comet throughout the writing experience because I hugged my dog Rocky while I read his book and what he thought Comet might say (if she could) about him and their family when it was her time to pass.  Garth responded with a chuckle and then said that Comet is a great dog but no Enzo.  That actually he dedicated the book to his childhood dog, Muggs, who he found inspiration from when writing Enzo.  He was particularly interested in the relationship Muggs had with Garth’s father.

When the time came for Garth to sign books I got in line with all three of his books, The Art of Racing in the Rain, Raven Stole the Moon and How Evan Broke His Head and Other Secrets.  While waiting in line I brought up a picture of Rocky on my BlackBerry to show Garth.  When it was my turn to approach the signing table I said hi and showed Garth the picture of Rocky and said he wanted to say hi too.  (I know I’m a total dork but oh well.)  I then proceeded in introducing myself and telling Garth that I was “Planet Books” and was the blogger who had lived in Okinawa.  Garth remembered me and generously signed all three of my books.  He even honored my request of signing my copy of The Art of Racing in the Rain to me AND Rocky.

I just have to say that if you have not read any of Garth Stein’s novels then you don’t know what you are missing and believe me, you’re missing something.  You don’t have to be a dog owner to enjoy and even love The Art of Racing in the Rain.  You just have to love wonderful writing, great storytelling, rich characters and books with heart.

{The picture you see here of the cover of The Art of Racing in the Rain is not the original cover.  I was so obsessed with this book when I read it that I posed Rocky on the guest bed in our house in Okinawa and posted it on Planet Books next to an image of the books cover art.  My sister was then inspired to work some PhotoShop magic and insert Rocky’s profile into the cover art.  So this is my own personal cover art picture of one of my favorite books with my favorite canine in the whole universe.}