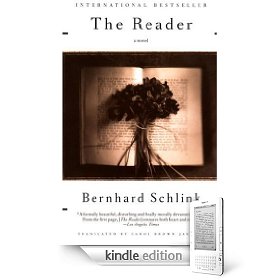 Unfortunately, thanks to all the hype over the film, I already knew the secret of The Reader when I started to read it.  I don’t think that it ruined the story for me though.  Instead it made each hint into Hanna Schmitz’s secret that much more frustrating.  During the 2009 award season earlier this year, I watched many interviews with actress Kate Winslet.  During one of these interviews she made said some very interesting things regarding playing Schmitz in the movie adaption of The Reader.  “How do you begin to understand the mind of an SS Gaurd?  That was extremely hard for me.” and “I did find my own way of understanding her because she has a secret.”

The Reader is narrated by the grown up character called Michael Berg.  When he was fifteen he developed a temporarliy debilitating illness and during one of his attacks, while walking home, he meets Hanna Schmitz.  She helps him out and assists him home.  Michael gets better and with the suggestion of his mother, he makes a visit to Hanna’s apartment to thank her again.  Somewhere between the doorway and the kitchen table an affair between a woman in her mid-thirties and this fifteen year old boy (though she is led to believe that he is seventeen) begins and lasts for a few months.  During their affair, Hanna begins to have Michael read to her before she will join him in her bath and bed.  Due to her secret though, the summer ends abruptly when she suddenly leaves town and leaves in her wake a broken hearted and confused teenager.  It takes many years for Michael to recover from this and when he sees her again, it is in the most horrible and unbelievable places he could have ever imagined.  Hanna is on trial for war crimes that occured during WWII and Michael is a law student assigned to cover the trials for a class in post-war Germany.

The Reader is thick with drama, suspense, lust and secrets.  I don’t think it is a book to enjoy due to the serious and heavy subjects but it is an important novel to help remind people of the horrors of war and what the human mind and body is forced to do in those terrible times in order to survive.  I am glad I read The Reader and I am especially interested in seeing the film version as soon as I can.

Below I have posted Kate Winslet’s interview on CBS Sunday Morning from earlier this year.  In it she talks about her role in The Reader as well as her role in Revolutionary Road.  I LOVE HER!