In thirty days a dream of mine is going to come true.  One of my best friends, Jesse, and I are going on a road trip.  This isn’t a road trip to just anywhere either.  We are going to Music City USA, Nashville, TN to attend CMA Music Fest aka Fan Fair!  I have been a lover and singer of country music since 1992 (and Olivia Newton-John’s country records from the 70’s since birth) and can’t believe that I’m going to the “Mecca” of country music in a few short weeks.  Yee Haw!!

A week ago Jesse and I were concerned that the festival wasn’t going to happen next month after the massive, deadly and destructive floods wreaked havoc on Nashville.  Last Monday night I received an e-mail from the Gaylord Opryland Hotel announcing that due to the detrimental flooding that changed the resort into a giant pool, they will be closed for at least three months and that all reservations made for those dates will be cancelled.  Uh Oh! 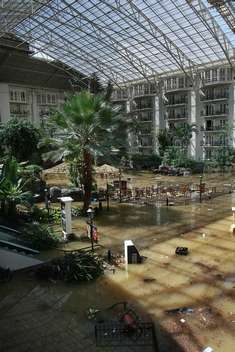 After checking The Tennessean, CNN and other news websites the following morning I decided to make a new reservation at a hotel in the downtown area that has an easy cancellation policy.  I still didn’t know if the show would go on so I wanted to play it safe but I also wanted to be sure we had a hotel room in case it was still on.  Turns out the Gaylord Opryland Hotel makes up 12% of all hotel rooms in the Nashville area!  WOW!  I consider myself lucky that I got a room for us at a great rate and closer to the action before all the hotels in the area booked up with displaced people attending the festival.

Jesse and I, and probably all the other country music fans who will be attending CMA Fest 2010, are looking forward to going to one of my favorite cities in the country, spending our money to help the local economy and seeing/listening to some amazing music.  The festival lasts four days/nights and concerts will be held at the Riverfront Stage, LP Field as well as at the local honky-tonks on Broadway, 2nd Avenue and other venues in Music City USA.

So, to mark the beginning of the count down, I would like to share a video of one of the groups I can’t wait to see on the Riverfront Stage.  They are called Steel Magnolia and are the winners of last year’s CMT’s Can You Duet.  Their awesome single is “Keep On Loving You” and I can’t wait to hear them perform it live.