On Sunday I took my newest best friend (there aren’t that many people I give that title to) Library Love on her “birthday date.”  LL’s birthday was actually Tuesday but because she keeps such a busy schedule, we made sure to set aside a day so I could help her celebrate.  You can just imagine my excitement when I learned that Sarah Blake (who lives in Washington D.C.) would be appearing at Politics & Prose Bookstore in our Nation’s Capital on the day LL and I had set aside for us.  Being book lovers, voracious readers and having met at Jennifer Weiner’s book event last summer I thought that Sarah Blake’s book event would be a perfect and memorable activity.  So after surprising LL with lunch and cupcakes in Bethesda, MD, I drove us down to D.C. to Politics & Prose.  Thanks to LL’s quick thinking and lightening fast moves we landed seats front row and center for Sarah Blake’s book reading and Q&A of The Postmistress.

We enjoyed Sarah’s impactful and memorable reading from two different sections of The Postmistress.  After she finished reading aloud to her captive audience it was time for Q&A’s.  Well, let me tell you something.  When it came to the moment when the microphone was open and waiting for the first question to be asked, no one stood up and braved the silence.  I had a question and after looking around at the shy faces I got up and went to the mic.  I told Sarah Blake that I absolutely loved her book and though I read it on my Kindle, I did buy a copy of the hardcover for her to sign and keep on my shelf.  I then asked her about the cover.  I told her that I knew my husband would really enjoy reading The Postmistress, the beautiful purple rose on the cover would be a deterrent for him.  I noted that there were plenty of men in the audience that day but there are also a lot of men out there who probably don’t read as much good historical fiction as their wives/girlfriends do because of the covers with pretty colors and feminine designs.  She of course said that she hoped that men would read her book anyway and she didn’t have much comment on the publishing and marketing of books towards certain sexes.

As the Q&A continued I remembered I had had a question that I came up with when I had just finished reading The Postmistress the other week.  It was regarding the fact that there really was a female reporter who was a member of “Murrow’s Boys” in London and Europe during WWII.  Her name was Mary Marvin Breckinridge and according to Wikipedia, she reported for Edward R. Murrow a total of fifty times during her tenure with his team throughout Europe and of those reports, seven were from Berlin, Germany.  I asked Ms. Blake if she based her character, Frankie Bard, on M. Marvin Breckinridge and if she’d had the chance to meet her since she lived in D.C. till she died in 2002.  Sarah’s answer was very surprising!  She said that she knew she wanted to make one of her main characters a woman who reported for Murrow in London and Europe but it wasn’t till later in her writing/researching that she learned that there were actually two female reporters who worked for Murrow at that time.  She added that no, she had never met Ms. Breckinridge.  WOW!  Talk about coincidences!  That’s HUGE! 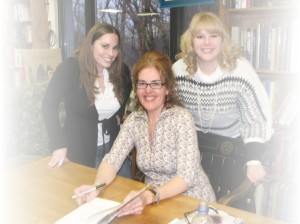 After the Q&A segment of the hour wrapped up, all the fans gathered in line with their books for Sarah to sign.  LL rushed out of her chair so fast I barely realized she was third or fourth in line.  I set our folding chairs against the wall like the store’s manager asked and joined LL in line.  After Sarah signed our books as well as my mother-in-law’s copy that I brought with me we asked the lady in line behind us to take our picture with Sarah.  So, there we are!  We had such a great day celebrating LL’s birthday and meeting Sarah Blake.

If you get the chance to read The Postmistress, I can’t stress enough that you will love it.  Even if historical fiction isn’t your cup ‘o tea, it’s really a great story.  You can learn more about my thoughts on the book by checking out my review HERE.

Long time no see!  Sorry about that.  Hubby, Rocky and I have been back in the good ‘ole U.S. of A. for almost three weeks and have been very busy, as you can imagine.  We’ve been buying a car, getting phones, reconnecting with old friends, getting familiar with the area again and house hunting.  We found a house but have to wait for it to be built so we will be staying with my in-laws through the end of the summer till the house is ready.  It will be lovely though and so worth the wait.

Of course with all the distractions and things-to-do my reading and blogging have fallen to the way side.  I have missed blogging and decided that a Sunday Salon post was the best way to get back on the blogging wagon and start June the right way.  I just started reading the Pulitzer Prize winning novel Olive Kitteridge last night on my Kindle and though I’ve only read a few screens worth of it, I like it and am reminded of The Little Giant of Aberdeen County.

This Wednesday evening Hubby and I will be attending a reading/book signing event with George Pelecanos at a local Borders Books.  Hubby is a big fan of Pelecanos and he is resides in my hometown of Silver Spring, MD.  It should be a great evening.  We missed Michael Connelly’s event at the same Borders last Tuesday but Hubby had just started his new gig that day and going out for the evening would have been a little much.

I’m also excited about two new releases this week.  Dave Matthews Band will be releasing their latest studio album Big Whiskey and the GrooGrux King this Tuesday and I plan on driving around with the volume all the way up and listening to it from beginning to end that day.  (UPDATE: I just got our tix to see DMB at Nissan Pavilion on August 8th!!!)

The second thing that I will be picking up this week is Martha Stewart’s Cupcakes.  I can’t wait to be in our new gourmet kitchen so I can make cupcakes and cookies till my heart and stomach’s content.

Today has been a busy day in the kitchen for me.  One of my close friends here in Okinawa is taking the kids home for the summer and has asked me to make her some of Martha Stewart’s Coconut Cupcakes.  These cupcakes are simply AMAZING but are tricky to make.  There are a lot of big steps and things tend to get a bit messy.  Well, now I am exhausted but the cupcakes do look amazing.  I highly recommend making these delectable treats when you need a fancy cupcake to knock everyone’s socks off.  It has worked for me every time.

Last night AFN started to air the new “Nashville Star”.  It began airing in the States last week on NBC.  Some of you know that I auditioned for this season via a video recording audition.  The U.S. Military and DOD employees and their dependants were allowed to submit a recorded video audition tape that was then compared against all other tapes from military installations all over the world.  This included ships, bases, and everything in between where eligible persons may be stationed.

The hubby and I were settled in for two hours of prime singing entertainment because that is what we expect from this show and have been fans over the last few seasons that aired on USA Network.  Well, last night made us wonder just what about my video audition wasn’t good enough.  I will continue to watch as the new season goes forth this summer but as of the first night’s performances, there wasn’t much there.

I’d like to share with you the two songs I cut when I did a demo in Nashville in 2002.  It’s hard to believe that it was that long ago because I can still smell the cedar lined recording studio nestled into the Brentwood, TN suburbs.  It was an amazing experience.  Karen Brandt\’s Demo Recording of \”Sorry\” & Karen Brandt\’s Demo Recording of \”You\’re Not Here To Miss You\”

After this week I’m going to cut down on the baking and only make a cookie recipe every two weeks. The hubby is starting to complain about the yummies every week and I am using so much butter, it’s a bit ridiculous.  Plus it doesn’t help that last week on Martha Stewart Living it was Cupcake Week and I couldn’t resist making two of her cupcake recipes in the last week.  Her Coconut Cupcakes and her White Cupcakes.  DELICIOUS!!!!!  (Sorry there aren’t any pics… they were gone in an instant!)

Today Rocky and I had a lovely day of making Martha Stewart’s Almond Horn cookies from the Martha Stewart Cookie Cookbook and reading BOOMSDAY.  Tomorrow I’m going on a guided tour with friends of the local Japanese Love Motels.  It should be interesting and I will report on what I learn right here on Planet Books.

The Almond Horns turned out pretty well on their own but would probably be better accompanied with a cup of coffee or tea.