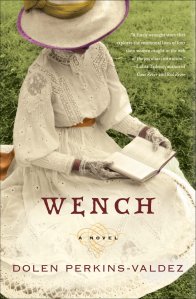 Subject ~ Tawawa House in many respects is like any other American resort before the Civil War. Situated in Ohio, this idyllic retreat is particularly nice in the summer when the Southern humidity is too much to bear. The main building, with its luxurious finishes, is loftier than the white cottages that flank it, but then again, the smaller structures are better positioned to catch any breeze that may come off the pond. And they provide more privacy, which best suits the needs of the Southern white men who vacation there every summer with their black, enslaved mistresses. It’s their open secret.
Lizzie, Reenie, and Sweet are regulars at Tawawa House. They have become friends over the years as they reunite and share developments in their own lives and on their respective plantations. They don’t bother too much with questions of freedom, though the resort is situated in free territory–but when truth-telling Mawu comes to the resort and starts talking of running away, things change.

Dolen Perkins-Valdez’s novel Wench takes an interesting, yet previously unknown to me, piece of American history and brings it to life in the mind of the reader.  In the author’s note at the end of the book Perkins-Valdez says that Tawawa Resort was real but eventually did close and was sold to a Methodist Church organization which is now the present-day Wilberforce University.

The feeling of the book was good, literally and figuratively.   Set between the years 1852 and 1854  in “Southern” Tennessee (Shelby County county which is just east of Memphis) and “Northern” Ohio, Perkins-Valdez brings pre-Civil War America to life in our minds.  Character development is strong.  The four main women of the book are vivid and unique. They care for each other deeply and admire and respect each other for the most part.

The core character of Wench is Lizzie, a literate and hopeful house slave who believes her master and father of her two children when he says he will free their children.  A large part of the book focuses on Lizzie’s story and I enjoyed these parts the most.  I think the sections about Lizzie could have stood on their own as a book actually.

The only problem I had with Wench was part one.  It felt disjointed and out of place.  Once part two started it felt like the true starting point for the book.  Part one was full of important information and development that was explained later in the book.  I think when I considered that the book started with part two instead, I enjoyed it much better.  I really enjoyed the story of Lizzie and what the characters discovered about themselves as the story went along.

I was contacted by Danielle Plafsky at Harper Collins Publishers and she thought that since I had enjoyed Kathryn Stockett’s The Help so much that I would like Wench.  Thank you Danielle for sending me a copy of Wench!  It was a good read all in all and I think it would be a great book for discussion in a book club setting.

This was my favorite meme to put together.  I like looking at the book covers and putting them all together.  It makes me want to go to the book store!  Friday Finds is hosted by MizB at Should Be Reading.  While browsing fabulous book blogs,  Amazon.com, Washington Post.com, NPR.org, various other places on the Internet, and getting recommendations from friends, these are the books that either made it to my wish list this week or I downloaded the samples on my Kindle from Amazon.com.